It is a rare occurrence for a Canadian team to be able to consider itself among the world's best in the game of soccer. Clubs like A.C. Milan, Leeds United, Boca Juniors of Argentina and Real Madrid are common at all levels of international play, and exclusivity has always been as familiar to the teams that dominate the sport as the names themselves. However, when you are able to assemble a squad that can compile as impressive a record as the Oakville Winstars have over the past three years, both domestically and internationally, such a feat becomes a little easier to imagine.

When the Winstars traveled to Dallas, Texas late last March for the seventeenth annual Dallas Cup, they were aware of the magnitude of the tournament, one that has become unofficially recognized as the Under-19 World Club Championship. This was their third tour of duty at the renowned competition since their inception in 1993. That the Winstars were invited back to the Dallas Cup was no surprise, as a year earlier they made it all the way to the semifinals in Dallas before finally bowing out to Costa Rica. What is most impressive, however, is that they were welcomed for a third time in three years, this time as part of a 16-team 'Super Group" Past winners of the super group division read like a who's who of world soccer: Tahuichi of Bolivia, Moscow Dynamo, West Ham United, two time winners Real Madrid, and last year's champion's Sao Paulo of Brazil.

The Winstars were keeping some elite company indeed, and it was a challenge of international scope that the team truly relished. It's a great challenge and I look (onward to it; said Winstar coach Bobby Graham prior to the tournament. "I've been to the semi-finals of the Super Cup once before, in 1990 with Wexford (another traditional Canadian powerhouse in domestic amateur soccer) against Moscow Dynamo and the feeling in the stadium was incredible." An early 4-0 loss to the Italian powerhouse, A.C. Milan, could have easily set the tone for the Winstars In elite super group play However, the Oakville team fought their way back from a 2-0 deficit in their second match against their hosts, the highly-touted Dallas Rockets, to earn themselves a 2-2 draw, A subsequent 5-0 drubbing of Costa Rica In their third and final round-robin contest met the goals differential needed to guarantee a spot in the final eight, a rare distinction for a Canadian entry. A heartbreaking 2-1 loss in quarter-final play against the Boca Juniors of Argentina, in which the Canadian side hit the post twice and crossbar once in the last ten minutes of play, closed out the tournament for the impressive side.

Last fall, the Oakville Winstars were also able to capture the Washington, D.C. Capital Cup, one of the most recognized Under19 tournaments in North America. At that event, they defeated Greensboro, North Carolina 4-0 in the tournament final. Since then, the 'Stars have also won the East York Tournament and the prestigious International Robbie Tournament, defeating the aforementioned Wexford team 1-0 in the final match at the Canada Day Weekend festivities.

This year's stats are just as impressive, as the Winstars are currently in first place in the Ontario Youth Soccer League, and are again preparing for the cup final against North-West Azzurri in October.

The team's prowess is reflected by the interest they have generated amongst U.S. college coaches who have signed no less than six Winstar players to full scholarships at NCAA division-one schools. In fact, two noteworthy defenders, Geoffrey Allard and Paul Saliba, have recently been signed a tandem to deals estimated at $20,000 a year by Philadelphia's Drexel University. "We've always had to face teams which had better talent than us and that is v have always emphasized disciplined teamwork," remarks coach Graham have always been selective of our players recruiting kids with talent of course, b kids who exhibit good discipline, kid families who Stress a good work ethics and disciplined background, as this generally reflects itself on the field". Coining the phrase "talent wins but teamwork and intelligence wins scholarships," coach Graham has been instill these qualities in his players to a Canadian amateur soccer dynamics international proportions In the process.

WHEN THE NCAA CAME KNOCKING, THESE BOYS ANSWERED THE DOOR!

Note: These players are all playing at the NCAA Division 1 Level 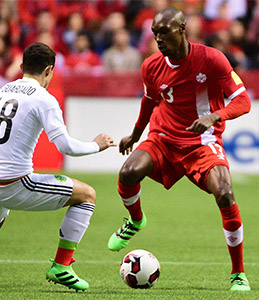 Back to the Testimonials page.